The Dorchester County Civil Rights collection documents the Civil Rights movement occurring in Cambridge, Maryland from 1958 -1990 with the bulk of the materials dating from 1961 – 1970. Materials include newspaper clippings, political literature, and campaign materials relating to the Civil Rights movement in Cambridge, including three scrapbooks containing newspaper clippings and ephemera related to unrest in Cambridge. The scrapbooks were maintained by Thomas Applegarth, Jr., a member of the anti-protest Dorchester Business and Citizens Association. Within the loose documents is segregationist literature from the George Wallace campaign, National States Rights Party, and more, which is contrasted with material collected from the NAACP and handwritten documents from Cambridge residents. For more information, visit the Finding Aid. 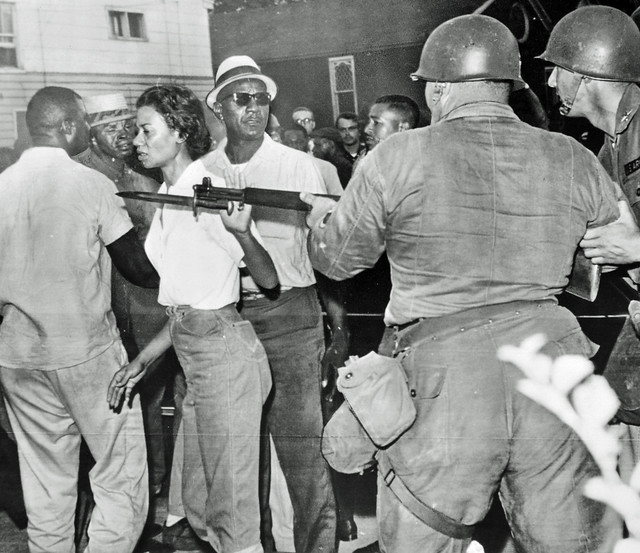 "In the midst of ongoing fist fights, rock throwing and gun battles between white segregationists and African American seeking civil rights in 1963 Cambridge, Maryland, there was an astonishing phenomenon. White workers sought black leadership to aid the struggle to organize and strengthen interracial unions in the town. The Cambridge, Maryland. civil rights struggle from 1963-67 involved the longest occupation by armed forces of a U.S. town since Reconstruction and presents a far different narrative than that of the Civil Rights movement taught in schoolbooks today. Early on, the leadership deviated from other concurrent civil rights struggles for legal equality by taking up social justice demands such as good jobs, housing, schools and health care. It was also different because it was an indigenous struggle to the town as opposed to one orchestrated by national rights leaders. The leadership of the Cambridge Non-Violent Action Committee (CNAC) also did not reject armed self-defense. CNAC, which affiliated with the Student Non-Violent Coordinating Committee (SNCC), was the only chapter led by adults and probably the only one whose principal strategist was a woman. Much has been written about Cambridge elsewhere and a good blow-by-blow account can be found in Civil War on Race Street by Peter B. Levy. However, less well-known is how in the midst of violent racial clashes between African Americans and whites in the town, white and black workers united behind the local civil rights leaders in their long quest to form labor unions there. To read an account, see https://washingtonspark.wordpress.com/2015/05/31/raging-civil-rights-struggle-leads-to-union-victories-cambridge-md-1963/ "