Isaac Kemp, a 23-year-old berry picker from Virginia, and employed by Frank Barnes of Somerset County, Maryland, was lynched on Friday, June 8, 1894, by a mob of about 150 people in Princess Anne, Maryland.  Kemp was with a group of about a dozen workers that had received their pay from Mr. Barnes when they arrived at a country store owned by Charles Miller, located about seven miles north of Pocomoke City.
At around 9:00 p.m. on the night of June 6, the workers purchased whiskey, and shortly became unruly and began knocking down displays in the store.  Constable Ned Carver, at the proprietor's request, asked the group to quell their destructive behavior, stating that the group could either leave or be arrested.  One drunken member of the group said "We'll come as we --- please!"  At this moment, a fight broke out between Isaac Kemp and Constable Carver.  Pushed outside of the store, the fight continued with Frank McCready, Constable Carver's brother, coming to his aid.  As the fight escalated, Carver and McCready were beaten over the head with clubs and empty beer bottles.1  Battered and bloody, the two men were punished within an inch of their lives, but the fight continued, and for a moment, stopped, leaving Constable Carver and Mr. McCready nearly dead.  Apparently unsatisfied, Isaac Kemp ran over to Carver, and with a razor, cut the constable multiple times on his face and legs, killing Ned Carver.2
With the store destroyed, and Carver and McCready on the ground, the group fled the scene.  Mr. C.A. Veasy attempted to clean the two men, then ran to Dr. Dashielle for medical treatment.  Once the doctor got to the victims, McCready was alive but badly injured.  As for Constable Carver, Dr. Dashielle said that there was nothing he could do to save him. Ned Carver was 32 years old and survived by one child. 3
Within two hours, ten of the twelve men were arrested and placed in the Princess Anne jail on Main Street.4  The other two men apparently left the store when the men began fighting and were arrested shortly after in Pocomoke City.5  Early in the morning of Thursday, June 7, a group of about 75 men approached the Princess Anne jail, explaining to Deputy Dryden that they had a prisoner for him to arraign (another 75 men were placed on guard).  Once the jailer opened the door, the mob overpowered the deputy and rushed into the jail.  Officer Dryden refused to give the mob the keys to the jail cell, and the group resorted to using a battering ram to open the door.  Forced to hand the keys over to the mob at gunpoint, Officer Dryden could do nothing but watch as the angry men found the supposed ringleader of the attack: Isaac Kemp.  One of the other men, John Handy, confessed that Kemp was not only the lone person drinking, but said that he was the only one to hit Constable Carver with the bottle.  Satisfied that the mob had found their man, Kemp was riddled with about 50 bullets while chained in the cell, killing him instantly.6 None of the other prisoners in the jail detained for the attack on Carver and McCready were harmed, and it was initially reported that none of the members of the mob could be identified. However, Alva N. Gibbons, a man who spent the night in the jail with the sheriff, noted that he recognized one of the members of the mob to be Samuel Webb, whose mask accidentally fell during the raid. The sheriff was also quoted as being able to identify "one of the lynchers" as Sewell Webb. 7
Afraid that the mob would return for the other men, Officer Dryden requested a clandestine removal of the group to the jail in Salisbury, Maryland, about 15 miles north of Princess Anne.  However, when the mob returned to the jail for the others and realized that they had been transferred, a request to send a train for the 100 men to take them to Salisbury was denied.  In Salisbury, word had gotten out that the prisoners were there, and tensions between the white citizens who wished to lynch them and the armed black citizens who vowed to protect the prisoners created a problem in town.  As a result, another secret transfer of the ten workers from Virginia was made, taking them to "Murderers Row" in Baltimore City, leaving the chaos behind on the Eastern Shore.8  Once tensions seemed to be under control, the accused faced trial and the conclusion was that Isaac Kemp came to his death from pistol wounds inflicted by some unknown parties. State Attorney Henry J. Waters conducted the examination at the inquest.9

7. "A Lynching Sequel to the Carver Tradegy in Somerset." The Sun, 9 June 1894. (It has not been confirmed that Sewell and Samuel are the same person.)

Accessed from the Maryland State Archives website here and used under fair use.

"Murdered by Negroes" The Cambridge Democrat and News, 8 June 1894

"A Lynching Sequel to the Carver Tragedy in Somerset" The Baltimore Sun, 9 June 1894

This diary that has several entries documenting a Princess Anne woman's experience of the lynching of Isaac Kemp comes from the Wilmer O. Lankford III Papers (1984.011). For more information, visit the Finding Aid.

Transcription of the handwriting can be found below the images. 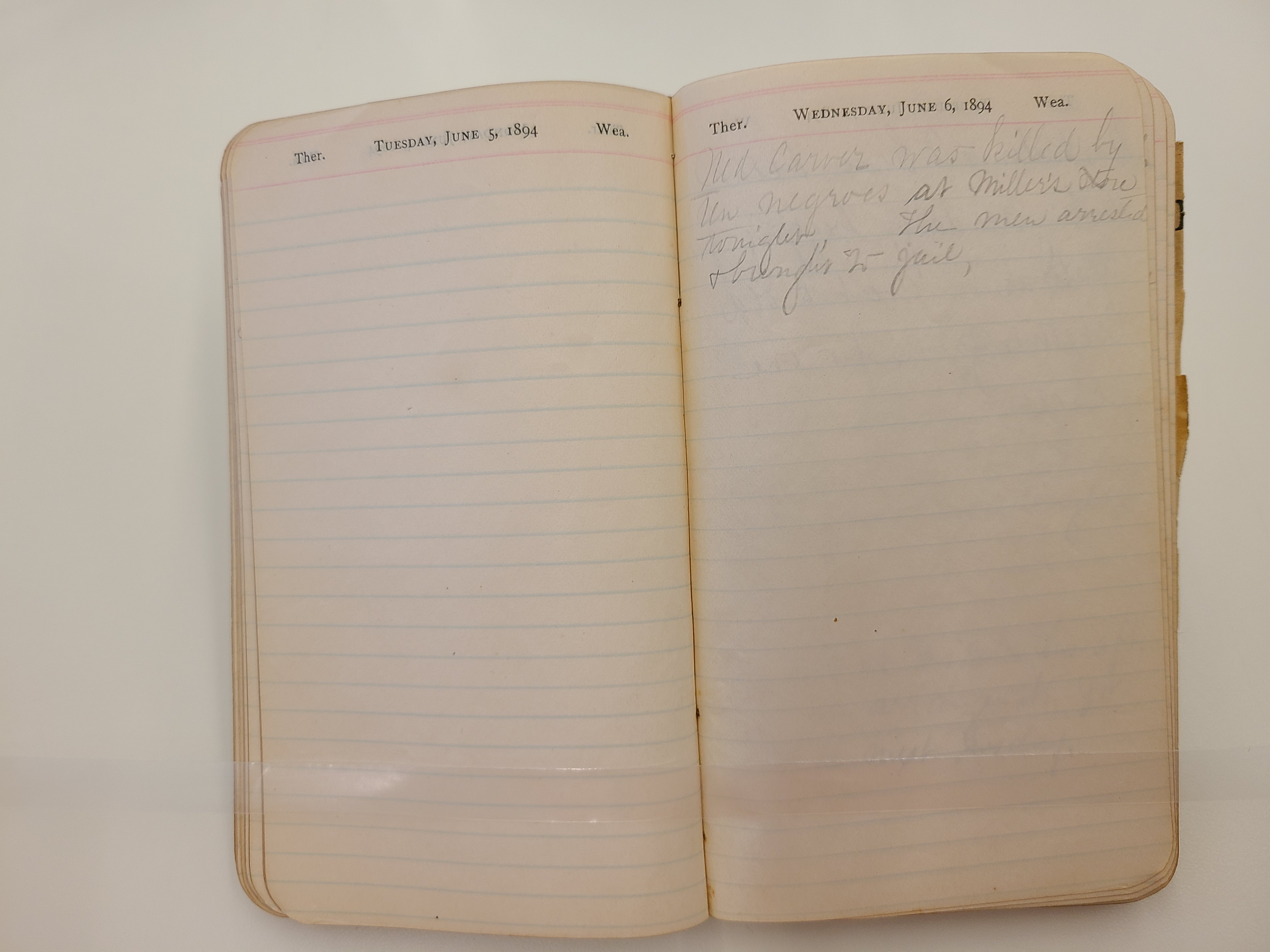 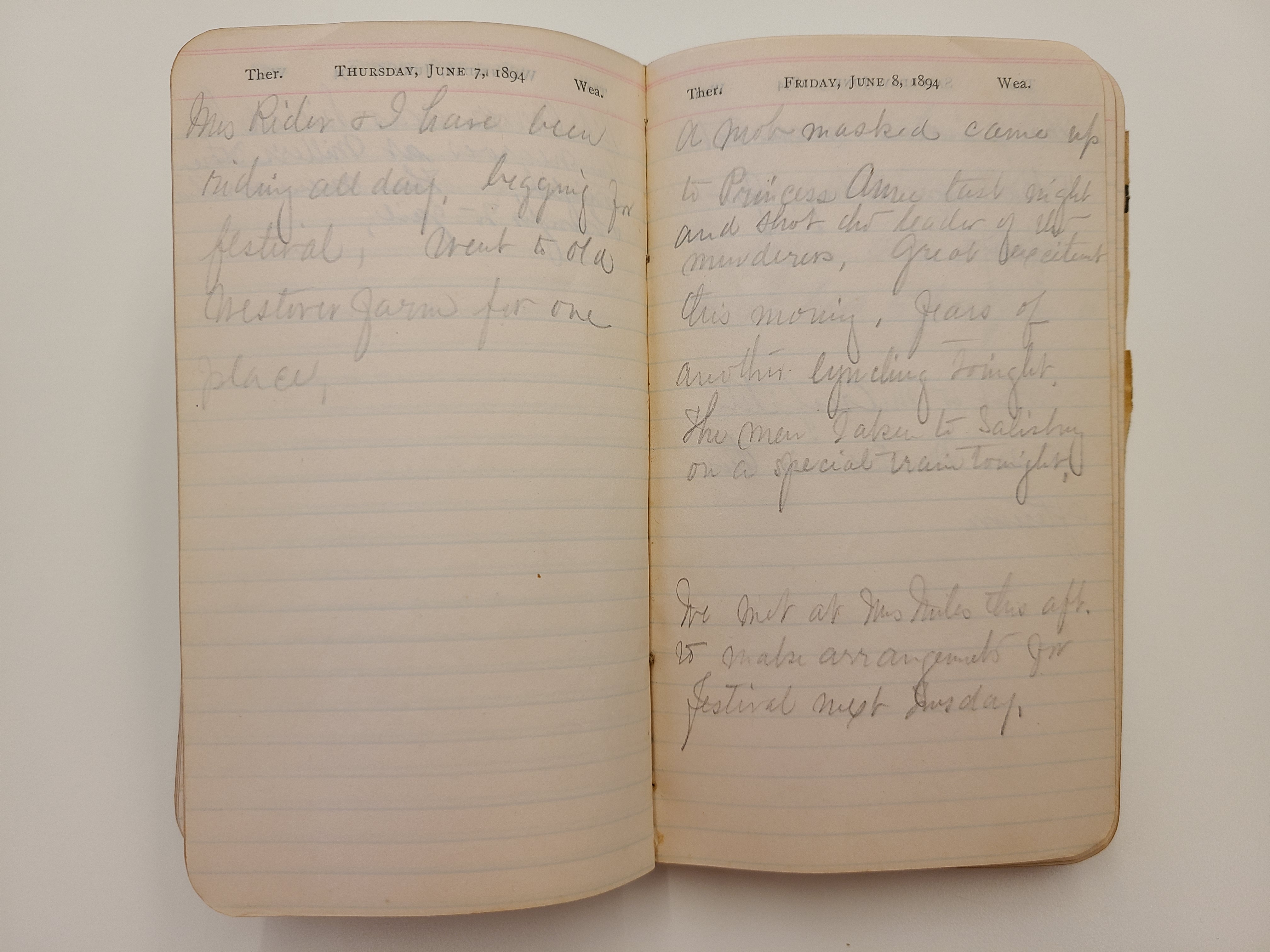 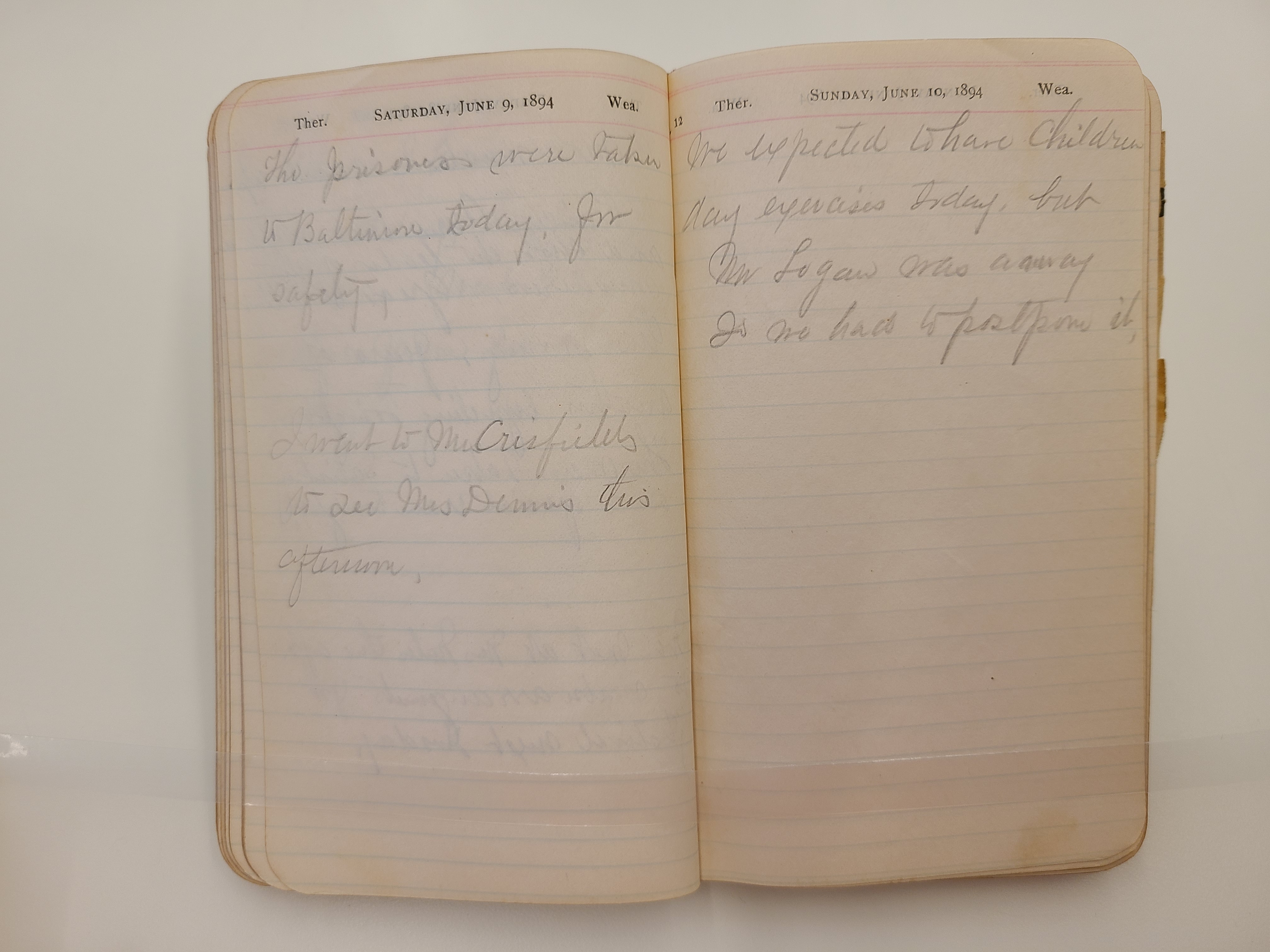 Mrs. Rider and I have been riding all day, begging for festival, went to old Westover farm for one place,

A mob masked came up to Princess Anne last night and shot the leader of the murderers, great excitement this morning. Fears of another lynching tonight. The men taken to Salisbury on a special train tonight.

We met at Mrs. Miles this aft. to make arrangements for festival next Sunday.

The prisoners were taken to Baltimore today, for safety,

I went to Mr. Crisfield to see Mrs. Dennis this afternoon.

We expected to have children day exercises today, but Mr Logan was away so we had to postpone it.