There are a variety of apps out there to help students study organic chemistry.  These are just a few.

Some of the apps are free, while others are not.  Please use your own discretion and best judgment before purchasing any of them, as their being listed here is not  a recommendation on our part, simply a listing of what we have found so far! 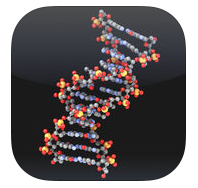 Molecules is an application for viewing three-dimensional renderings of molecules and manipulating them using your fingers. You can rotate the molecules by moving your finger across the display, zoom in or out by using two-finger pinch gestures, or pan the molecule by moving two fingers across the screen at once. These structures can be viewed in both ball-and-stick and space filling visualization modes.  New molecules can be downloaded from either the RCSB Protein Data Bank (http://www.rcsb.org/pdb), an international repository of biological molecules and their 3-D structures, or NCBI's PubChem (http://pubchem.ncbi.nlm.nih.gov), a public database of compounds. Molecules can be downloaded directly to your handheld device and stored there for later viewing.  Custom molecular structures can be downloaded to the application via iTunes file sharing, or through the use of custom URL formats. For more details, please visit our website.  Molecules is a BSD-licensed open source project.

This application details the structures and functions of over 90 reagents encountered in typical introductory organic chemistry courses.

The best way to learn chemistry is back with a brand new version built specifically for the iPad! Introducing Chem Pro, the chemistry tutor on your iPad and the only resource you will need to excel in AP Chemistry or General Chemistry. Chem Pro features an exclusive lesson library containing a total of 80 videos that cover the entire year of AP and General Chemistry. It also includes nine sets of flash cards for memorizing all the needed elements and polyatomic ions, as well as some essential tools - a periodic table, a molar mass calculator, a unit converter, and an equation sheet, allowing you to save an enormous amount of time doing homework problems.

Learn Named Reactions, understand mechanisms, see examples from Reaxys®, test your knowledge with ReactionFlash for iPhone, iPad, and iPod Touch. Over 250 Named Reactions are available to you for free. Named organic chemistry reactions - usually named after their discoverers - are a fundamental part of every chemist's toolkit. ReactionFlash helps you learn and understand named reactions: from the famous, to those you've forgotten, to those only a Nobel Prize Winner knows! Not only does the app give you the reaction, it also shows you the known mechanism, published examples from Reaxys, and even allows you to test your skills with the ReactionFlash Quiz. Why spend laborious hours making your own reaction flash cards when ReactionFlash gives you all you need and makes learning fun?

This is the free version of Named Reactions Pro, which contains 300 organic reactions. Named Reactions Lite contains details on a number of common organic reactions, from Aldol to Wittig. Reactions are fully indexed and searchable, and can be visually browsed through an intuitive "reaction card" view. Each reaction includes a description, tags, related reactions, reaction scheme, carefully depicted mechanism, and links to internet and print resources, including Wikipedia, ChemSpider, and Organic Chemistry Portal. If you like this app, check out our Named Reactions Pro, which has all the same features but hundreds more reactions. Be sure to also check out ChemFormula, the world's most advanced molecular weight calculator and chemical search tool. For more detailed information on named reactions in this app see Strategic Applications of Named Reactions in Organic Synthesis, by László Kürti and Barbara Czakó http://namedreactions.com/SaveSave

Organic Chemistry Nomenclature is the ultimate way for Chemistry students to study and memorize the names and structures of all the important chemical functional groups. Quiz yourself, and do it in a way that's fun and logically organized. Don't waste time with other apps that provide a clutter of unnecessary information you don't need to know. Organic Chemistry Nomenclature let's you choose the quizzes important to your class and focus your efforts to quickly and efficiently study. Quizzes are divided into the following categories - Hydrocarbon - Halogen - Oxygen - Nitrogen - Sulfur - Phosphorus / Boron - Heterocycles You can choose to be quizzed on any combination of these categories at once. *** Smart Quiz System ensures you will never be asked the same question twice in a row and questions you answer correctly will be asked less often. Truly the best way to learn important chemical nomenclature.*** Created By: Alex Martinko (Design) Sean Luther (Programming)

Experience the beauty of Organic Chemistry! This app provides a visual approach to organic chemistry. It is not meant to replace a textbook - it should be seen as a visual aid. The molecules and reactions are just briefly described. The main focus are the numerous animations of the molecules and reactions. Currently only alkanes, alkenes and alkynes are described. You can test your knowledge through a quiz of 40 questions. IMPORTANT: Hardware requirements - SCREEN SIZE > 3.7 inches and DUAL-CORE CPU! The animations are strongly compressed in order to keep the app size small. This is why the animations only run on newer smartphones!