In additional to providing other helpful services, libraries collect, organize, and provide access to information.

Libraries in the U.S. use Library of Congress Subject Headings to describe, classify, and organize information in a logical arrangement.

LOC Subject Headings comprise a "controlled vocabulary." This means when you search using words that are included in this vocabulary, the search system will pull up information that officially matches the description.

The pre-written subject headings below can be searched by simply adding an ethnic group. Relevant ethnic groups to insert may include ethnic groups such as Latino (Latinx?), Native American, African American, and Asian and Pacific American.

Ethnic American literatures have broad subject headings and sub-headings. Broad ones that might also be useful to you include:

1. Try this example search in the WorldCat Discovery box below.

3. On the left side of your screen, explore FORMAT: Limit results to PRINT BOOKS under format. Open the record for A new literary history of America by Greil Marcus, Werner Sollors

Question: Why did the catalog pull up this book?

4. Identify this book's availability: Location, status, Call Number. Use the Call Number Map tool in WorldCat Discovery to find this book in our library. It is located at the top-right side of the 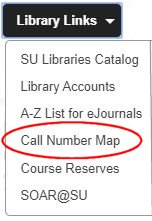 5. See a book (or article) not owned by SU? Request through InterLibrary Loan.