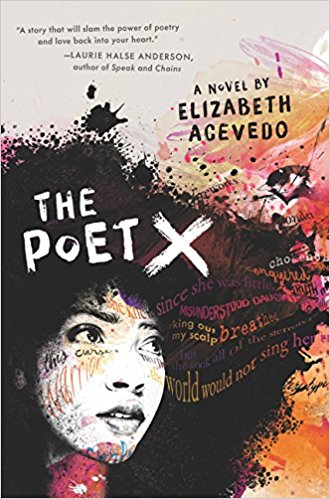 Xiomara, also known as X, is no stranger to anger or frustration. Her big hair and curves draw unwanted attention. Her mother’s Catholic routine and father’s strict expectations don’t work for her. She’s consistently a target for slurs and slander her Afro-Latina heritage makes it difficult to fit in at her Harlem school. Her only saving grace from her growing defeat is the leather journal gifted by her twin brother so that she can express her emotions with her words, rather than with her fists.

X is finally able to sum up her feelings about being sexualized by her peers, judged by her parents, and underestimated by her teachers. She can share secrets, express hopes, and plan dreams. She writes of her interactions with her best friend, her twin’s possible homosexuality, and her own relationship with a boy that her parent’s won’t (and don’t) approve of.

At first, Xiomara’s poetry is a private outlet; a way to put the ups and downs of each day on paper. But when her English teacher invites her to the school’s slam poetry club, a new world opens up for Xiomara as she breaks into her role as The Poet X, surprising her teacher, her parents, and herself.

Award winning slam poet Elizabeth Acevedo delivers an astounding novel in verse that anyone who has ever felt out of place or misunderstood needs to read. The Poet X is quick, upbeat, and a surefire winner.