A Novel Idea!: Nights in Rodanthe 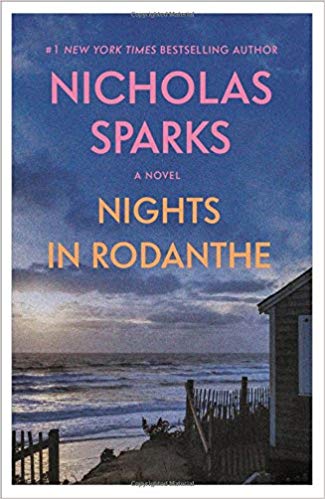 Nights in Rodanthe is one of Nicholas Sparks’ older novels but one that I had to read before watching the movie, which stars Richard Gere and Diane Lane. It is a very easy read and somewhat reminds me of one of Sparks’ other novels, The Notebook, because its main character tells a story within the story itself. Nights in Rodanthe begins with background information of Adrienne, a woman with three grown children and whose husband left her seventeen years ago. Then, readers meet Amanda, Adrienne’s daughter, who has had a difficult time lately because her husband passed away. With Amanda slacking in everyday chores and not spending as much time with her children, Adrienne finally feels the need to share her story with her daughter, in hopes that she will not only understand more of who her mother is, but that it will help her move on. Adrienne’s story goes back fourteen years to 1988, when a friend asked her to watch over her inn in Rodanthe, North Carolina, while she is away. There, she meets Paul Flanner, the only guest for the weekend, who just sold his medical practice and is on a journey to restore his past. The two get to know each other in several ways, but especially when they are stuck inside due to a strong storm along the coast. Finally, their time together must come to an end because Paul is flying to Ecuador in hopes to get to know his son, who he was never there for when he was growing up because Paul was too involved with his work. The remainder of the story will have you flying through the pages because you need to find out what happens between Adrienne and Paul and if Paul ever did restore the broken relationship with his son. The ending was only somewhat predictable, but Sparks always knows how to throw in one or two surprises for his readers.