A Novel Idea!: Looking for Alaska 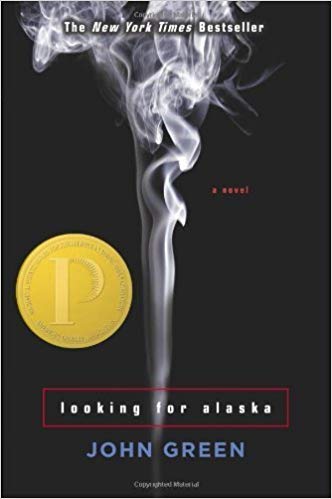 Looking for Alaska is an award-winning novel by John Green, and no, it is not talking about Alaska the state. Green organizes the book into two main parts: “Before” and “After.” He keeps you wondering all the way up until the last page of the “Before” section what event symbolizes the “Before” and why there must be an “After.” The “chapters” are also organized in a unique way because their titles are exactly how many days the chapter is “Before,” such as “one hundred one days before.” The book begins with main character and narrator Miles Halter saying goodbye to his parents and what very few “friends” he has in his Florida town. He has decided to go seek a “Great Perhaps,” the last words from poet Francois Rabelais, at the Culver Creek Boarding School in Alabama because he does not want to wait until he dies to seek a Great Perhaps. When he arrives at the school, he meets his roommate Chip Martin, otherwise known as the Colonel. Not much later does he give Miles the nickname Pudge because of how skinny his figure is. The Colonel also introduces Pudge to several of his closest friends, most importantly the pretty, smart, and fascinating Alaska Young. The three friends hang out constantly, sometimes working on their homework and studying, but mainly smoking, drinking, and playing pranks on people they don’t like. Pudge gets to a point where he isn’t sure if he’s annoyed by Alaska’s destructive ways of thinking or if he’s in love with her, even though she has a boyfriend whom she’s madly in love with. I cannot go into detail about the last pages of the “Before” section or the beginning of “After” without giving anything away, but I will admit that it is shocking and something that most readers won’t see coming. After the unforeseen event, nothing is the same at Culver Creek, nor is anything the same with the characters.

Looking for Alaska is not my personal favorite John Green novel but is still a great read nonetheless. It has a lot of topics and themes that would appeal to young adults today even though it was published over 10 years ago.