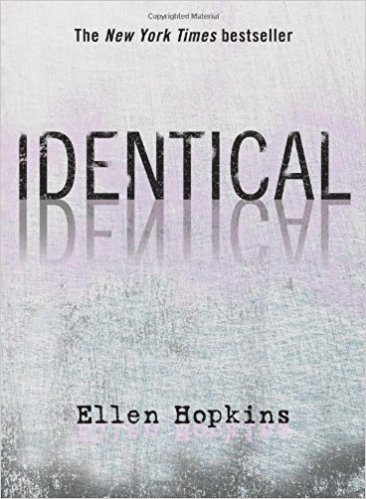 Whoa! This Young Adult novel, written from the viewpoints of identical twins in poetic prose, was an intense story of lives gone horribly wrong. Sixteen year old twins Kaeleigh and Raeanne are exact opposites, one a far too compliant favorite of Daddy’s, the other a self-destructive rebel. Mother is a politician, and absent. The only support for the girls is their abusive father. Raeanne turns to sex and drugs to fill the void. Kaeleigh works at a senior citizens’ center, and prays every night that Daddy’s footsteps walk past her bedroom door. Kaeleigh is reluctant to tell anyone what’s been happening in her bedroom. Shame, confusion, trying to separate the abuse from love, particularly because it started when she was too young to know definitively that it was wrong, trying to figure out why her mother essentially abandoned them. All of the improper attention leading to an eating disorder makes perfect sense. Raeanne is abandoned by mom and, in her eyes, also rejected by dad. She understands that the “relationship” between her father and Kaeleigh is wrong, but can’t help feeling jealous that he doesn’t love her like he loves Kaeleigh. Raeanne uses sex to pay for drugs so she doesn’t have to carry all that rejection with her.

This was a very heavy book. The topics were intense and real and horrible,
and it was not easy to read.

One definite take-away for me is to not assume I know what’s pushing people to behave in a certain way. I may see a teenager like Raeanne, who parties too much and is always with a different guy, and assume she wants to be that way. In truth, that girl was so alone, she didn’t know how to behave differently. She saw no other outlet for her pain. It reminded me that there are things that people are experiencing that they don’t want to share, that they want to keep hidden, and those things affect how they interact with other people. It can be extremely frustrating, when I can’t understand why someone is making the choices they are, but perhaps there is something weighing on them that I’m just not meant to know.