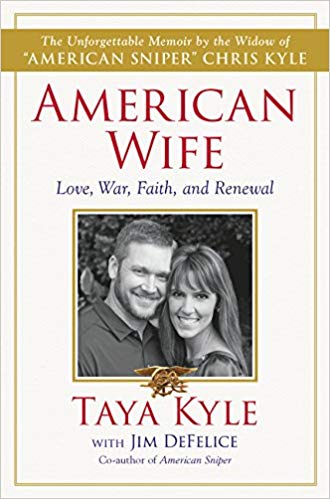 American Wife is an absolute MUST read for anyone who is a military spouse, knows a military spouse, is currently serving or previously served in the U.S. military, or any fans of Chris Kyle and his story behind American Sniper. Perhaps you have read his novel or seen the movie starring Bradley Cooper as Chris and Sienna Miller as his wife, Taya. In this novel, Taya sums up her life in four words: love, war, faith, and renewal (although the book also involves three more chapters: fame, shattered, and despair). She entices readers with details about how her and Chris met, fell in love, and eventually got married and had two children. But during their decade-long marriage, Chris went on four deployments as a U.S. Navy SEAL and had to leave his family behind for months at a time. While he was fighting in the Iraq War as “The most lethal sniper in U.S. history,” Taya was left trying to raise their children practically on her own. They all missed Chris, and when he did come home, there was a strain on him and Taya’s marriage. Nobody is ever completely the same after witnessing war, and Chris was no different. The two went through many struggles, but eventually found their way back to why they fell in love in the first place. They got to a point where their marriage was at an all-time high, Chris did not re-enlist, and everything was going seemingly well with the publication of American Sniper, until the unimaginable happened – Chris was shot and killed by a veteran he was trying to help. Taya’s life as a widow will pull at your heartstrings and leave you wondering how she managed to deal with such grief while simultaneously raising two children and dealing with everything else Chris left behind. This book inspired me tremendously and made me not only so thankful for those who serve our country, but left me in awe of everyone they leave back home.